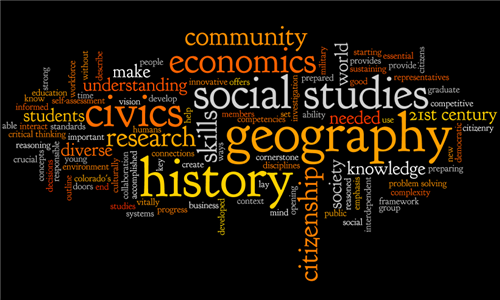 The middle school social studies curriculum provides focused study in World History, and United States History.  The classes are designed to show the relationship between geography, history, and cultures.  Instruction is supported through the use of lectures, discussions, cooperative learning, student presentations, field trips, guest speakers, multimedia resources (including Smart Board lessons), and student self-study.

World Cultures
The subject matter for this class is a combination of World Geography & World History.  The class is a survey of the regions in the world.  We’ll cover the geography, culture and history of each region. The class covers such historical topics as Ancient Egypt, Greece, Rome, European Middle Ages and the Age of Exploration and Latin America. The class covers and reinforces such skills as:  organization, taking notes from a lecture, group work, using primary sources, and critical thinking.
United States History 1
United States History 2

This curriculum covers all major events that have shaped the character of the United States.  The curriculum is divided into two parts – Origins of the Americas through the American Civil War and Reconstruction through early 21st Century.  Part 1 begins by setting the scene within the Americas by a survey of many of the Native American tribes.  Early European exploration and colonization are addressed, as well as, an overview of the world scene as the Americas are changing.  The curriculum connects past events to current world situation whenever possible.  Part 2 begins with Civil War reconstruction and its aftermath.  The course addresses the American Industrialization, Spanish American War, Great Depression, World War I, World War II, Korean War, Vietnam War, an examination of the Cold War, the technological growth at the end of the 20th Century and the US in a post 9/11 world.